Things are happening at Mid-Missouri Bank in 2020. Not only is the bank building their brand new headquarters, which is currently under construction on Independence Road, but soon renovations will begin on their Bolivar MidMoBank location, a bank that has ties to the city of Bolivar and Polk County dating back to 1872.

CEO Brian Riedy says the headquarters upgrade, as well as Bolivar improvements, are commitments to reinvesting in Mid-Missouri Bank’s long-term future and the future of the communities MidMoBank calls home. Community banks are making a comeback and Riedy says there aren’t many places that are as friendly to community banks as the Ozarks.

“We’re just experiencing a lot of growth right now, not only in facilities, but also in customers, assets and leadership additions,” says Riedy.

Leadership for the Next Several Decades

“We’re focused on providing the best customer experiences,” says Miller. “Whether seeking financial consultation with one of our personal bankers at one of our locations, handling a transaction online or using our free mobile apps, we’re always aiming to improve the process and add the most value.”

Miller says the bigger banks are cutting costs by abbreviating services and products. The fallout of this is that customers are flocking to smaller banks en masse for a personalized experience. “Technology is freeing up our team members to become financial consultants and offer personalized solutions in addition to doing banking transactions in one-on-one settings.”

“In the 1970s, 75% of banks were community based with the large national and global banks splitting the remaining 25% of the banking public,” says Andrew Moore, director of marketing for MidMoBank. “By the 2000s it was completely reversed.” He says this has caused community banks to have to step up their efforts and not only give customers everything those giant banks give them but also give them more in order to win them back.

“People here in the Ozarks still appreciate local and we think the strategy for the foreseeable future is that they still want their money local. They want to drive to a place and talk to a person and know their money is taken care of locally,” says Riedy. “They’re frustrated with financial entities changing names as well as eliminating traditional products and services. We’re here to say, ‘make the last banking switch you’ll ever make because we’re adding advantages, not cutting them.’”

Riedy also mentions that the banks have Experience Centers ready to teach inexperienced users how to use any new banking technology, guided by a MidMoBank local expert. “We’re technology leaders. We’re consultation leaders as well—what’s best for you is best for us.”

Mid-Missouri Bank also offers KASASA free checking and savings products that pay customers back, to stay at the forefront of what today’s new banking customers are looking for in deposit products from their bank. 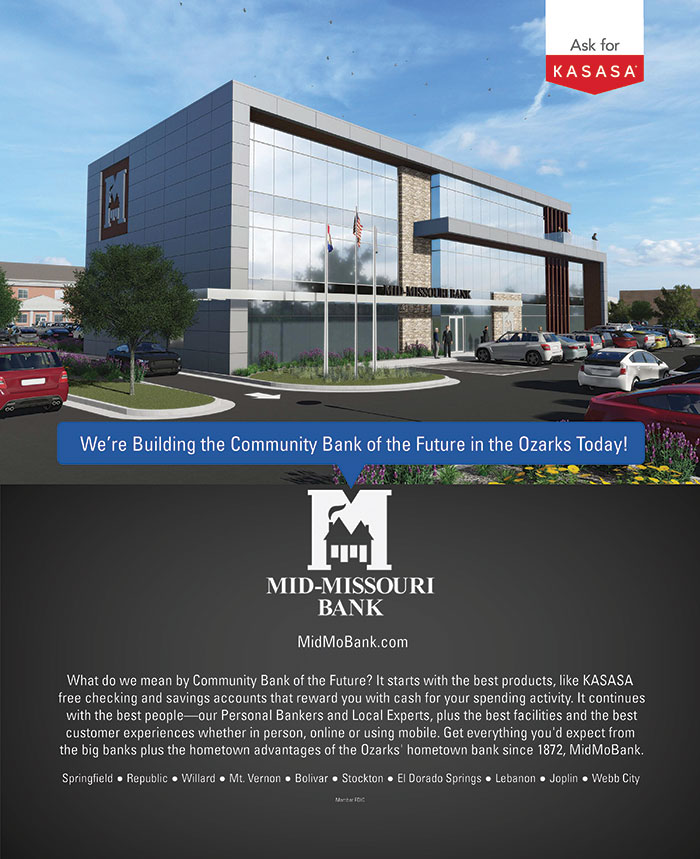