According to a 2018 Harris Pole, 97% of employers said WGU Graduates were prepared for their jobs.”

WGU Missouri is committed to providing high-quality, career-boosting education to working adults ready to earn their degree. As Missouri’s only nonprofit, accredited, online university, WGU Missouri was created in 2013 by Governor Jay Nixon as a state affiliate of Western Governors University to expand access to affordable, higher education for residents.

Now celebrating its seventh anniversary, WGU is proving to be the answer for thousands in Springfield and Missouri who are otherwise unable to complete their degrees through traditional means. With an average student age of 37, WGU has 3,271 enrolled, an increase of more than 16 percent over last year. Since it launched, the university has conferred 3,704 degrees, a 36 percent growth since last year. These grads are seeing a difference in their lives as more career opportunities become available. In fact, students earn an average of $12,600 more within two years of graduation.

WGU Missouri offers over 60 bachelor’s and master’s degree programs in business, education, IT and health professions, including nursing. Its industry-leading, competency-based structure allows students to leverage prior education, training and experience, so they move quickly through material they know to focus on what they still need to learn, resulting in accelerated degree completion at low cost.

With flat-rate tuition of about $3,500 per six-month term, WGU students can take as many courses as possible each term without added costs. Also, the university provides tuition discounts to employees of its many partners around the state, and since 2013, Missourians have been awarded over $2.9 million in WGU-funded scholarships. To learn more, visit Missouri.wgu.edu or call 855-948-8493. 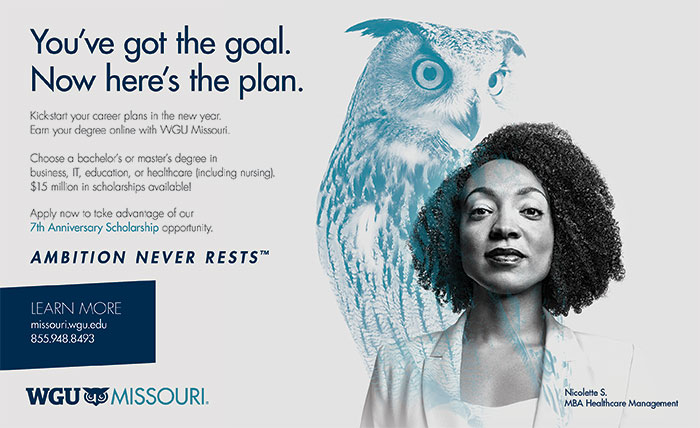